18: Moodger – A device may change your mood

I started with “A device that changes your mood”. And then I paused a while. It sounds like a medical device and may even feel a little deceiving, so I later change it to “A device may change your mood”.

This is not a lie. It is just another useless idea.

Is it though? Hear me out.

Yes, most people know about Nest. 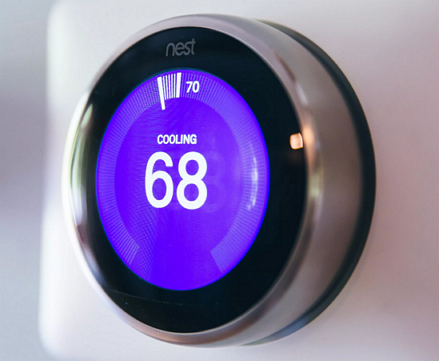 It’s a device that connects to the thermostat at your home, and lets you remotely control the temperature. Big deal, right? What makes people fall in love is that it will learn from human input and eventually starts adjusting itself.

In addition to that, it also has some nice features for energy efficiency. It generates a report, of course, every one loves reading a report and feel good about how much energy they have saved after using the device.

I have no objection that features in Nest should be considered as parts of the future smart home. Nowadays, we have all sorts of “smart” devices at home: smart light bulbs, smart monitors, smart fridge, smart microwave, the list goes on.

Yes, people in the future might really want to tweet from their fridge. But I am not falling in the same trap, only staying in the fixed mindset of “connection with machines”. Human, we should connect with human, device that connects people, that is the direction I want to go.

What brings human together?

If you don’t believe me, try this:

Many years ago, I wrote a small program called Jok4U. It can still be found in Wayback Machine. The idea was it randomly popped up a joke in your computer. It was a very naive program and did not do too much. But I tried…

Now what about this?

Instead of having a program installed in your computer, what if there is a small device, just like Nest, which is mounted on a wall. When you pass by, it will randomly ask you if you want to hear a joke. Something like what the following: 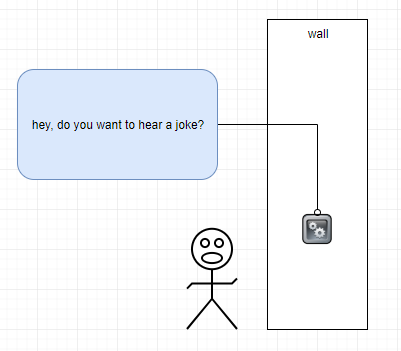 That user figure is passing by the device. The device has a motion sensor, so it knows someone is nearby. It asks “hey, do you  to hear a joke?”. If the user answers, “yes”. The device will tell a joke.

There are more, of course! The device support:

Moreover, we have to have this feature

This device will of course have to connect with Internet, so it can also download the jokes accordingly and upload the data for machine learning purpose.

Is it really a stupid idea?

If anyone is reading this idea, let me tell you why this is not a stupid idea, and also let me confirm you that I have been serious the whole time.

Use Case 1: Ease the tension

First, I love my kid.

But I admit some times it may get heated at home, especially, when

many other cases. I told myself I would not yell at my kid before she was born. But what I learn is, yelling at your kids does not make you a bad parent and does not mean you don’t love them (Murray Goldberg may not be a good dad model, but he loves his children).

Sometimes you just do what you have to do.

So, imagine when you are yelling at your kids, the device can sense the pitch hike and say “Knock Knock”. Both you and the kid will probably stop, and answer… “Who’s there?”. Now the tension is cool down.

Use Case 2: Change the mood

Being a grown-up sucks. Work is hard, traffic is bad, greedy banker and incompetent politicians never stop screwing economy up. It is difficult enough for people to laugh more.

What if when you open the door of your home, the device will take an image of your face and analyze your mood, and then respond accordingly.

The device will be capable of detecting the user current emotion: angry, or depressed, or sad. The device then reacts different by using different type of jokes, or maybe just play baby laughing. The idea is trying to change the mood of the user at the right time.

I am not a psychology expert, so I cannot say this will really work. More research may be required to validate this intention and use.

Now imagine if you have a party with some guests in the house. The device can detects more than usual amount of people passing. If the human voice level suddenly drops, this device can jump in to break the ice by telling a joke.

I cannot imagine how useful this device can be when a socially awkward person brings a date home. It is like a little wing man.

Who am I kidding, a socially awkward person never gets a date.

What is the name “Moodger” from?

It stands for “Mood Changer”. I actually like this name.

Basically, the idea is building a robot that tells jokes, reacts to human, understands human, and more importantly, alter the mood such that a human can still have a feel with other human as well as the world.

Many people may underestimate the power of laughter.

Building a robot telling joke is not really novel. In fact, back in 2010, researchers had already started this. See this article: Joke-Telling Robots Are the Final Frontier of Artificial Intelligence.

However, the novelty in “Moodger” is not really just a robot telling jokes. It’s a sensible helper. Just like Nest, it will learn from human command, human response, and ambient atmosphere to react accordingly.